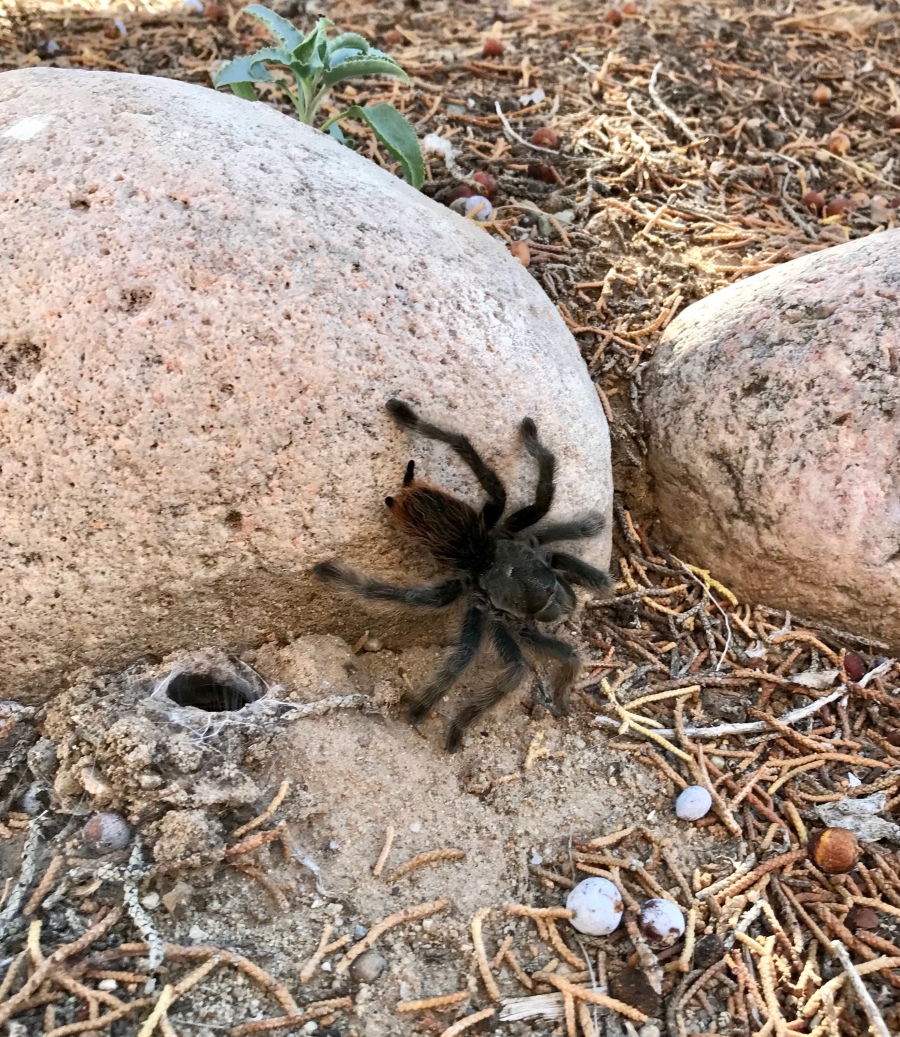 Tillie will probably outlive me. I hope so. She’s a western desert tarantula I’ve been watching for the last couple years. Her borrow is under a rock outside the door of my neighbor’s house. We both check on her frequently. If the entrance of her hole is covered with her silk, she’s home, deep inside. If her hole is not covered, she’s planning on going out soon. Or maybe she’s airing out her abode or wants a better view of animals like me who pass by her door. Although her eyesight is poor, she can sense shadows and vibrations. I’ve seen her retract quickly into her burrow if I get too close. She knows when I’m around, but never says hello.

Last fall my neighbor and I thought we’d offer a gift to Tillie, since she’d provided us so much nature viewing entertainment. We found a male tarantula walking the mesa nearby and captured him for Tillie.

We set the male down within a foot of her den. I’m sure she was waiting for a lover, but would this be a good match? Strands of silk crossed the doorway so an eager male could signal his arrival. The male we found—we’ll call him Ted—sensed her pheromones. He was drawn to the hole right away. He tapped gently on the silk strands.

“I’ve come to court you,” Ted yelled.  He tapped again. “Pretty lady! Are you there? We’ll have a good time together.” Silly Ted. After about fifteen seconds, Ted disappeared into Tillie’s lair.

Trembling, I waited for something to happen. No spider parts were flying out of the hole. After a few heavy breaths (mine, not his) Ted emerged, apparently unscathed. Sometimes the female tarantula will regain her appetite after mating and go after her partner for a meal. Not this one.

There were secrets, though, and it was unbearable. We couldn’t tell if he’d deposited the sperm he was carrying on his pedipalps into the appropriate place on Tillie. He may have been rebuffed, with Tillie waving him away like an empress.

Ted hung around, like a lovesick youth, within a couple feet of her burrow. Last we saw him, he was digging a hole about eight inches from her door. If he engineered the hole just right, he could tunnel into her burrow and surprise her, possibly winning over her recalcitrant heart. Once a mature male mates with a female tarantula, he dies within a few months. How romantic. If Ted had successfully mated with Tillie, he would expire near his true love.

Before winter set in, Tillie piled mud clods at the mouth of her hole, sealing it. She hibernated inside, living off what fat she had stored up in her body. In early spring I anxiously awaited the day she’d wake up and emerge from her long winter’s nap.

If we were lucky, Tillie would appear with hundreds of tiny tarantula spiderlings. Oh, what a glorious sight that would be! Baby tarantulas, off to make their way in the world. We waited and waited, worried that she had not survived the winter. We knew she would lay her eggs in a sac and tend them for six weeks or so before coming out. But when she uncovered her burrow entrance, we saw no babies. Maybe we’d missed the emergence. Maybe she hadn’t mated after all. Maybe she was barren.

We watched Tillie this past summer. Occasionally she came out in the mornings and walked around, then she would squish her hefty body back down her small hole and hang out.

This fall we rounded up another gift for Tillie—a male who would suit her discriminating tastes. I found a small tarantula and set it down near her hole. It appeared very interested, poking its paw (it was hairy, after all) in Tillie’s doorway. In a bat of an eye it backed up and dashed away. It was a female, not interested. Suitable only as a snack for Tillie.

Alas, would Tillie ever have a mate? Then one evening I walked by her hole to say hi. A handsome suitor was waiting near her door, motionless. I stared. Had the deed already happened? Was he recovering from his frolic? Was he slowly dying? He didn’t move. But once I withdrew, he scrambled and started digging a hole near her door, same as the impetuous youth from last year. Was he digging his own grave? A backdoor to her lair? Shelter for the night so he could try again the next day?

Today I saw that boy, a couple of legs extending beyond his hole. And Tillie was hunkered down in her burrow, eighteen inches away.  There was absolutely no movement, no action.

I didn’t name that fellow. When you name an animal, its demise seems more poignant. He’s a male tarantula, trying to unload the sperm on his pedipalp, doing his duty to perpetuate the species.

This morning I checked again, expecting to see the situation unchanged. But that determined male had left his hideout and was poking his appendages through Tillie’s doorway. When he took a break and walked around, I noticed he was missing two legs and a pedipalp. Obviously Tillie got a little personal with him. Yet he was still trying. I watched for about an hour. He poked and prodded and dunked his entire body in her burrow, head first then abdomen first, took a break and circled around her rock for another try. After stuffing himself in the burrow for about five minutes he exited and took off, stumbling to his own little hole. He still had six legs and one pedipalp and seemed exhausted.

Guess they had a successful canoodle.

Next spring I will look for tarantula babies again. Hordes of them. I crave the sight of tarantula spiderlings, like an impatient mother. Please bless the world, Lady Tillie. It is a sight I long to behold.