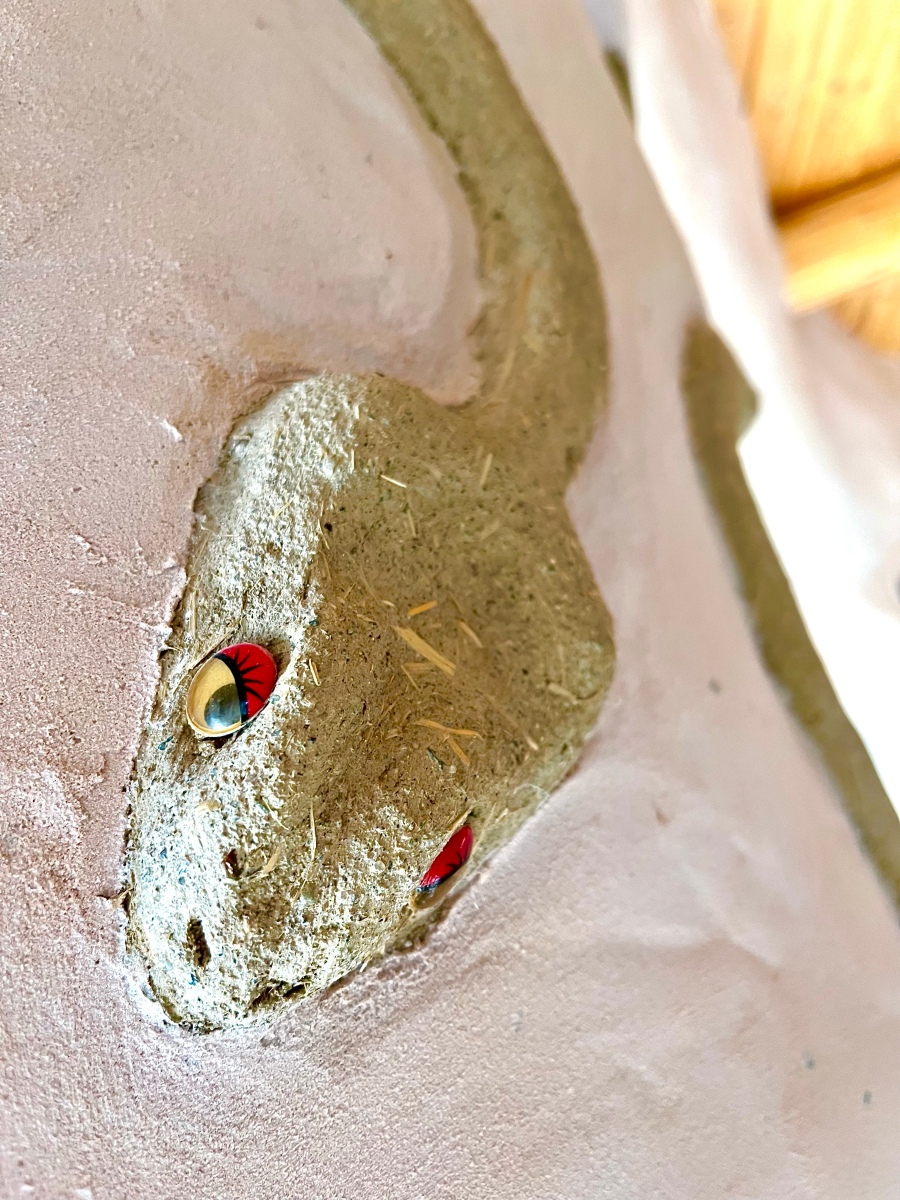 I put a snake on my wall.

Not sure why. I didn’t think much about the consequences.

At the time, I was plastering mud on the interior of my strawbale studio. Sticky, squishy, glorious mud. Slathering and troweling. Sculpting and birthing life on my walls.

My snake got a large triangular head and a long thin body. It crawled in and out of the wall itself, slithering around blue bottles and watching over the doorway. After working several hours I finished it.

Four days later I was walking around my building project. The day’s summer heat was finally subsiding. As my mind tallied all the things I needed to do, I heard it—an unmistakable warning rattle.

A few feet away was the snake. Big, really big, the biggest rattlesnake I’d ever seen, and I’d seen quite a few. Nearly five feet long; truly a matriarch. She didn’t waste time rattling. She took off, moving along the base of the wall and around the corner of the building with me in pursuit, shaking a shovel.

Why did I follow? I had no plan. The most I’d ever done before with a rattlesnake was to watch someone else herd the critter into a bucket for gentle relocation away from a dwelling.

The sun had already set and light was failing as I trailed the snake fifty feet to a juniper at the corner of the building. Beneath the tree it curled its ungainly body into a corkscrew, raised its head, and fastened its eyes on me, its tail doing a rattle dance.

I froze ten feet away thinking, “Oh! Now what?” Tangling with that snake was out of the question.

So I talked to her.

“I don’t want to hurt you. I really don’t. Will you please leave? Please?”

It remained coiled, slurping its forked tongue, rattling and writhing.

I wished it well and retreated, shivers traveling up my back.

About thirty minutes later, flashlight in hand, I came back to the juniper where I’d last seen her. Gone.

Perhaps she retreated into construction materials lying around.

The next day I looked at my long snake plastered on the studio wall and talked to it.

“Did you do that—call the goddess of all rattlesnakes to bless my building?” That’s what I wanted to believe. The snake on the wall did not speak.

I didn’t see the big rattlesnake again. In the intervening ten years, I’ve seen no rattlesnakes near my studio. Plenty of gopher snakes, but no rattlers.

Even today I wonder, was that rattlesnake disappointed that I didn’t put a rattle on the snake plastered on the wall? I could always add one. Mud lets you do things like that. Maybe then I’d start seeing rattlesnakes instead of gopher snakes near my studio.

But thanks, Mother Rattlesnake, for your blessing.