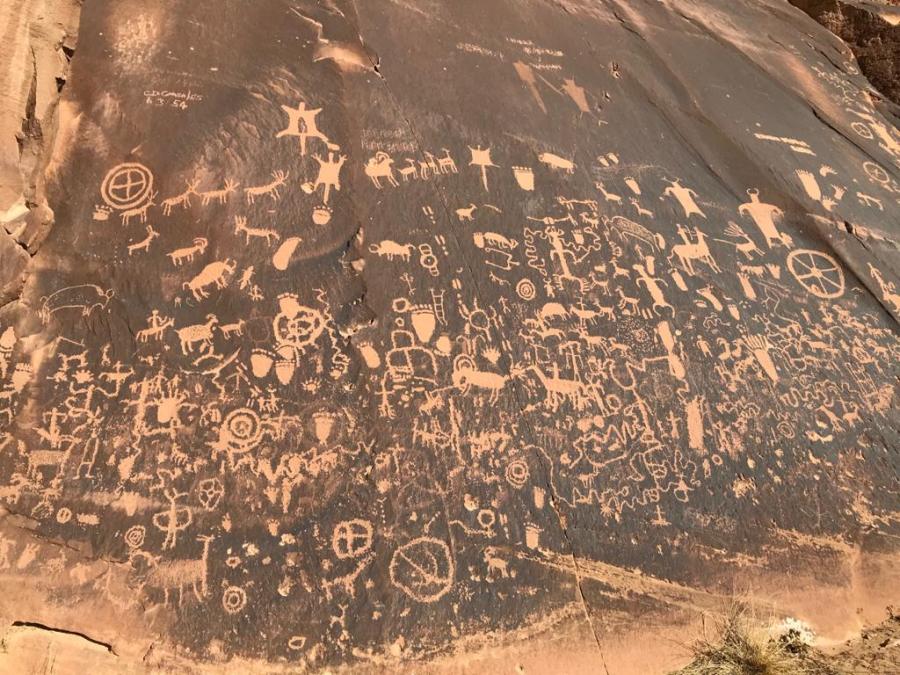 I met Malinda Seneviratne on the street in Colombo, Sri Lanka last year when I couldn’t flag down an auto rickshaw during rush hour. In exasperation, I turned to the nearest guy on the sidewalk, who happened to be Malinda. He detected my American accent. When I told him I was from New Mexico, he mentioned Santa Fe and Albuquerque. That was unusual.

Recently we’ve reconnected over the miracle of WhatsApp. We’ve gone beyond mere chatting. We spout ideas, philosophy, images, stories, and practically solve the riddles of the universe–all because of his poetry and essays. I read his words, coffee mug in hand, jot a few thoughts to him, and we’re off. I like to think in the mornings that I stretch my mind. Poetry and WhatsApp discourse can do that.

But then he wrote this article. Using my name, my words, my photograph of Newspaper Rock in southeast Utah, where I recently revisited. I’ve experienced many rock art sites in the Southwest and have always been moved by the messages in these places. But he’s said it better than I. Yes, he’s used my words, but he’s used his ideas to tie them together in a beautiful way.

Malinda writes regularly for the Sri Lanka Daily News, where this article appeared. Treat yourself to his gorgeous poetry and thoughtful articles at his blogsites.

Thanks, Malinda, for being that guy on the sidewalk.

I met Theresa Nichols serendipitously on Dharmapala Mawatha, almost a year ago. She’s a retired park ranger and a writer of children’s books who lives in Aztec, New Mexico. These, I now feel, are marginal parts of her identity although the work entailed probably bleeds color to those other Theresas that few know about.

Theresa or ‘Terry’ as she is known wrote to me about rocks. Rocks and chisels, chiseler and chiseled. She wrote about ‘Newspaper Rock’ which is in the Southwest of the USA. She informed me that there are many such places and they’ve been desecrated and pillaged by people who have little regard for these places.

‘At some, after being in the canyon for five days or so, I’ve experienced the most profound connections, alignment, joy–communication with the ancients. People who “pot-hunt” as we call it, have no sense of that, and are so cut off from themselves, maybe dwelling in a state of some kind of perverted fear, and they rip through these places with shovel and backhoe, dynamite and rock saw, violating the spirit of the place and themselves.’

So, of ‘Newspaper Rock,’ she had this to say.

‘I was drawn not to the hundreds of temples I’ve visited in Asia, but the rock art of the Southwest, where people chipped figures, messages on stone, and today we can’t be sure of the messages. But I remember standing before one of them that looked like a lion track, there on the rock face in a faraway canyon, and I was drawn into the image and was looking out at me regarding it. The artist did not have a sense of self as he made it; he had slipped into the rock and now was there, along with his community, looking at future visitors, but mostly the ravens and the lizards and the red sandstone. “welcome,” I heard, because I was one of them for a moment, appreciating everything there in that canyon and the lives that were and are still there. The artist and everyone and everything embedded in the rock.’

There are rocks that were, rocks that have since become parts of buildings, parts of walls and have gone underground as foundations for edifices magnificent and humble. There are rocks that were, that have turned into image, chiseled beyond recognition, chiseled to the point that the rock that was is rarely thought of, even if recognized in the first place. Then there are rocks that are. Present tense. With or without chiseling. With or without message. Rocks which gaze can stroll across and rocks into which we enter or with which we blend, ‘Open Sesame Rocks’ if you will. Well, all rocks are ‘open’ in this sense and all things too, hard and soft, tangible and not, things that were, are and could be.

We see the Samadhi pilimaya. We see Aukana. Galviharaya. Buduruwagala. We see the Sigiriya frescoes and of course the graffiti. What stops us from looking at ourselves from the eyes of the rock, reading ourselves from the vantage of inscription? What stops us from ‘losing’ ourselves in things that surround us, individuals and collectives included? Do we fear losing ourselves forever and would we be more brave if we were convinced that this is the easiest way of finding out who we really are?

I don’t know. I know that Terry sees things differently. She moves through dimensions, wrecks linear time, looks at the night sky which, she says she learned in Peru, should not be an exercise to look for stars but the darkness between them where, she tells me, is where the stories lie.

Theresa Nichols is made of stories that haven’t got written. She reads bits and pieces, now and then. Maybe that’s best. Maybe we are not deserving to be read to more often. On the other hand, what she’s already said tells me that all stories are readable. Newspaper rocks there are. Newspaper trees, paw marks, sunsets, birdsong and pauses that give shape to a story. Newspapers. Stories. It’s all there. All readable. If you are willing to become rock or look for the darkness between light-points that are remnants of stars that perished aeons ago, she would add.