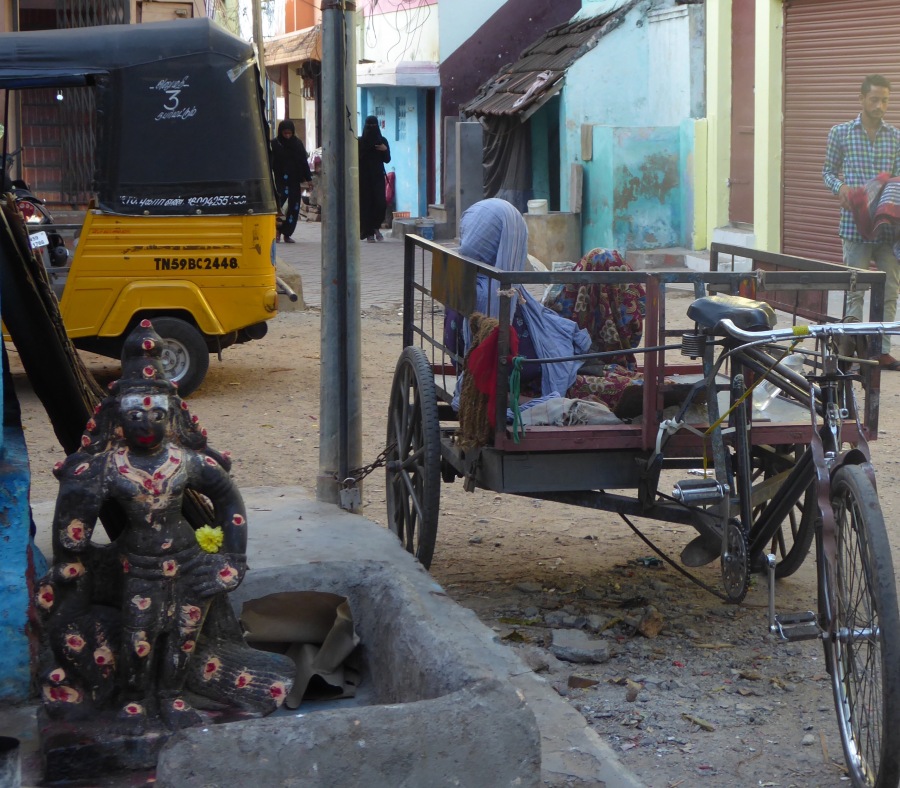 I don’t know why I pulled away. I had tried to get the old woman’s photo the day before, and the day before that. Right then was the perfect opportunity. She was practically inviting me to snap her portrait. “Vanga!” creaked her voice.

She was curled up on top of her cart. Unlike the previous day, when I saw her sprawled on the doorsteps asleep, she was awake and vibrant, noticing everything around her. Including me. Her lips were drawn around her toothless gums, and her wrinkled arms waved in the air.

“How old is she?” I asked at least three people. The first flashed all her fingers many times, open closed, open closed. I couldn’t count.

I asked another woman, who had just stepped around the sleeping old woman. “Is she your grandmother?”

“Yes,” she said. Then I realized that a street-dwelling woman that old was everyone’s grandmother.

Obviously, no one really knew how old the woman was, therefore she was a hundred. Maybe she really was a hundred years. A century.

I wanted her photograph, but I thought it would be rude to take it while she was awake. Somehow, it seemed as if I would be taking something from her without her consent, because she probably would not understand what I wanted. It was also rude to take it while she was asleep, but I tried to get the shot anyway, the day before as she was draped on the doorsteps. I just had to make sure no one was watching me; that would somehow make it okay. But everyone noticed me. People emerged from their houses and greeted me. So I slipped my camera back in my bag, and didn’t get the photograph. I instead ended up in her neighbor’s home after being invited for tea.

I could have visited with the old woman that morning as she called her greeting. I could have sat on her cart with her, and held her hand, and listened to her talk to me. She was deaf, someone had said, so I wouldn’t be able to have a conversation with her. Maybe that’s what sent me away. Or maybe her age frightened me. I would feel uncomfortable, sitting next to this weathered woman tucked in a worn sari, who had survived all kinds of struggles: having enough to eat, raising children, an absent husband, and life on the streets.

I could have met her for a little while, and exchanged good feelings with her. But instead, I walked away, feeling a pang inside of me.

Would she be alive tomorrow? Would I see her again, all bright and aware, sitting scrunched up in her cart, watching the world, and calling vanga to passersby?

As I walked away, I hoped she would be there the next day, awake and alert. I would sit with her awhile, and pass the morning with her, and hold her hand, and smile.

I would meet this ancient woman and honor her. And honor myself.

Read more about this Madurai neighborhood and my meeting the Grandmother for the first time on a morning walk at this link to my travel blog.